Bonjour, mes chéries! How have your weeks been? If you’ve been following me on Twitter, you would have read about the UPS fiasco I had today (Wednesday) that prevented me from accomplishing pretty much anything after work today. And that’s just ONE thing that went wrong today… *sigh*

On a positive note, August is coming to an end meaning the August vlog is coming up, AND AUTUMN IS FINALLY ARRIVING! The temperatures have been dropping significantly in New York from high 80s/low 90s to mid 70s. Although I’m not looking forward to cold winter, I am looking forward to this sweater weather that is right around the corner. But before we get too excited, I did want to bring you my End of Summer Lookbook!

I’ll be taking you around to a few of the places I went in my first three weekends here in New York City. I’ll be taking you through journal style so you can get a sneak peek of what is coming in my August vlog! If you want to shop my closet, unaffiliated links to where you can buy these outfit pieces are at the very end.

The first weekend in, I met up with 3 out of 4 (one was in London for training) housemates from last summer for the Union Square market, mani pedis, overpriced pizza, and rooftop drinks. For this outing, I went with a casual but still polished look because you never know where an evening will take you even if you started it with a simple nail salon girls trip.

Union Square Greenmarket is a farmers market that is in Union Square park on Mondays, Wednesdays, Fridays, and Saturdays.  They sell farm fresh produce, homemade bread and jams, and beautiful flowers. The day I went, there was a street fair going down Broadway Avenue right next to the park full of Puerto Rican dishes and vendors! It was so exciting to see the hustle bustle of tourists and New Yorkers browsing through the handmade goods being sold as they munched on authentic snacks.

As you can tell, the market was so full of people that this was as empty as I could get for some photos. But hey, what is New York without the crowd?

In this outfit, I wore printed pants in the fit Blake by Banana Republic (original $98, purchased $23.50) and paired it with a simple black tank top. I wore my infamous white Clark sandals (original $110, purchased $55) that have been appearing all over my Instagram. I topped it off with a large stone necklace. (You’ll notice my hairtie will make an appearance in every photo, because it’s a sneaky little thing that likes to creep into my photoshoots silently… I apologize for it.) I had slept a total of 3 hours that night from moving in the day before, but despite my puffy face I was very happy to be there…minus a few outtakes 😂.

After we strolled the market and got manicures/pedicures, we headed down to the Lower East Side (LES) for some good old fashioned New York slices at Pizza Beach. It’s an adorable restaurant that mimics a beachside restaurant and serves fresh made Neapolitan pizza and small antipasto dishes. The pizza, overpriced for many but relatively normal priced for someone like me who lived off of Mercurio’s in Pittsburgh for four years, was tasty and can even be split into two meals! The flavors were very aromatic and authentic, not too salty, not too oily. We also ordered cocktails (average cocktails in NYC are priced around $15) because their drinks were very summery and decently generous for a restaurant, if you know what I mean. But outside all the food critique, we were mainly there to catch up with each other since we go to different colleges.

Two of us ordered the Mushroom & Stracciatella pizza (White Truffle Oil, Roasted Leeks, Mascarpone), one ordered the Pink Vodka pizza (Pink Vodka Sauce, Imported Bufala de Campania, Aged Parmesan, Fresh Basil VT), and I ordered Spicy Soppressata (Napolitana Salumi, Fresh Mozz, Chili-Infused Honey) pizza. We all split a slice with each other and our general consensus was that mine was very spicy, Pink Vodka was on sauce-overload, and the mushroom pizza had a very distinctive but refined flavor. For drinks, we ordered two watermelon vodka martinis (both delicious with a good kick) and two Baewatch Fuego (jalapeno infused tequila, fresh watermelon and lime). Both drinks had the perfect amount of alcohol for a relaxing weekend dinner with friends. After dinner, we ended the night at Mr. Purple, one of my new favorite LES bars. It was a great welcome into the city, for good.

The second weekend was much more laidback. I spent some quality off-camera and off-blog one-on-one time with my roommate, Lisa, who is one of my best friends from high school. We grabbed drinks each day, unpacked and cleaned over some wine, and ate drunk pizza from the parlor down our street at 4am after a long night. Your classic twenty-something year old roomie rituals.

One of the days, we explored the neighborhood and grabbed some lunch at an amazing little ramen shop a few avenues over. On the way there, we found a stunning peekaboo view of the Chrysler building!

This dress is from Francesca’s ($44) and something that I can throw on with sneakers to dress down, heels to dress up. I love it because it’s partially cotton and very soft yet looks classy and thick. It’s something I can wear to my office or out to hang out with friends on a Saturday. The shoes are and oldie but a goodie by Vera Wang, and my bag and the decorative scarf are Michael Kors and Juicy Couture (RIP middle school days) respectively. I paired these with my favorite Buh Bye Paparazzi sunglasses by Perverse Sunglasses. My chunky bracelet is from a store in Taipei, Taiwan.

I will actually skip over where we ate for lunch this day for now, as it was so good that I will be bringing you a review of it next week! Be sure to mark your calendars for some delicious Japanese ramen!

This last weekend was a weekend for recovery and routine. Lisa and I got some work done at a cute coffee and kitchen called Blank Slate, did some grocery shopping at Eataly, cooked our dinners together, and gossiped of course. I love walking around the Flatiron district (which is where Madison Square Park is located) and perusing through the small shops. My favorite part is all the dogs in the park! It was so hard to concentrate on my work when tons of cute dogs were passing by begging me to pet them.

At Blank Slate, we ordered the dish of country bread with spicy guacamole, roasted tomato hummus, and goat cheese. Not going to lie, the ratio of dips to bread was very far off and we didn’t have extra crackers to dip, but the three dips were outstanding, enough for us to eat it by the spoonful #noshame. Lisa also ordered a giant melted cookie as a mid-afternoon dessert! It was warm, doughy, gooey, and everything you could wish for.

Next we headed to Madison Square Park for some sun, dogs, and greenery. This outfit is one of my recent favorites. The top is from Pretty Little Thing. The jeans are from Hollister (why do I still shop there?). My Perverse Sunglasses and my Clark white sandals are back at it. And it appears the hairtie was too… ugh.

After eyeing the dogs for long enough we meandered around Flatiron, perused through Eataly for some prosciutto, and watched the sun set as we made fun of all the lovey-dovey couples around us. As you can tell, we’re single. Still.

That’s it for this one! I hope you enjoyed my three end-of-summer go-to outfits and a little sneak peak of what is in my August vlog (coming next Friday, Sept. 8). Have a safe but fabulous Labor Day weekend, mes chéries!

Note: None of the links are affiliate! 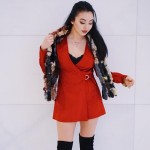 Based in New York City, Erica Huang is the creator and voice behind Bouge & Rouge. This blog is a playground of her thoughts where she invites you to join her on her journey through her 20s. Erica shares her lifestyle, fashion and beauty tips, adventures, and personal thoughts with the goal of inspiring others to always persevere and be unapologetically yourself.

You may also enjoy:

This site uses Akismet to reduce spam. Learn how your comment data is processed.

Bonjour! Je m’appelle Erica. I’m a fiery 20-somethin’-year-old brought to you by overpriced coffee. I’m a jack-of-all-trades and master of some living in NYC. Welcome to my playground of thoughts!

My Inspiration of the Moment

Playlist of the Month

Home is where the heart is